State #35 Delaware, the first state to ratify the constitution. Delaware signed it quickly because they loved that they were given 2 representatives just like the other 12 colonies even though they were the only one that couldn’t grow in size (blocked by Maryland and Pennsylvania).

Here is a list of order in which the states ratified the constitution. 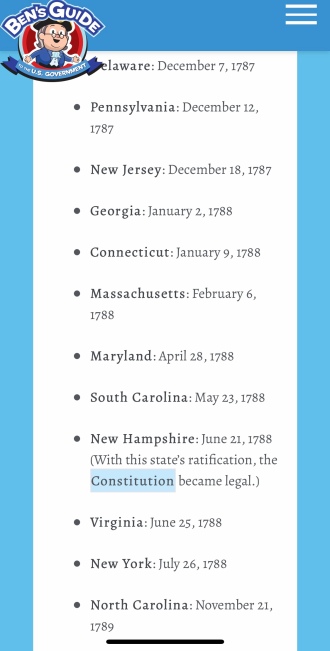 My parents bought land from the Martin’s to build our house on in Maryland. They had children the same ages as us, so we hit it off immediately. Heather and I have been best friends since the beginning of elementary school. She has since moved to Lewes, DE. Her neighborhood has an RV parking lot so we parked there and stayed at her house for the week. It was so nice to spread out. The girls each had their own room because Logan is off to college and loved every minute of it. We missed seeing Logan while we were there! Heather even bought them a TV for the loft so they could feel like they had their own space. 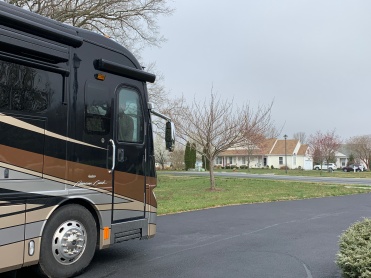 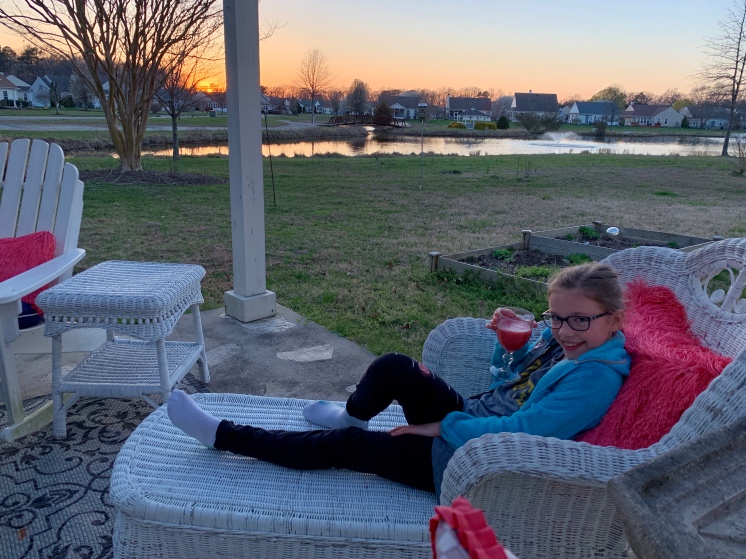 We drove out to Rehoboth Beach the first day we were there to just put our feet in the sand. We enjoyed drinks on the patio while watching the sunset. 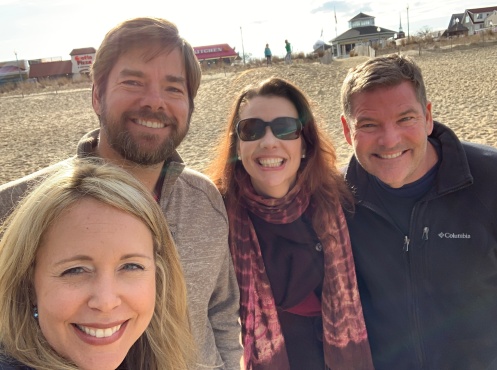 The girls and I went back out to Rehoboth Beach another day when Heather and Chris were working. The Thrasher boardwalk fries were delicious! They do not serve ketchup, only vinegar, which I love, but the girls were not as pleased. Not everything is open on the boardwalk during the spring which is limiting but we did pop in a few souvenir shops before they closed.

This town has a lot of history and is so cute. I loved learning about the people of Lewes back during the War of 1812. A British naval vessel parked out in the ocean and blocked the fisherman from fishing. Threatening their way of living they thought they’d control this small town. The British troops asked that the townspeople send food to feed their troops. When the very small town of Lewes refused, the British troops threatened to fire upon them. The Lewes people stood their ground and prepared for battle. They did not have an army so they had the women dress in mens clothes and took sticks and corn stalks and painted them black with ash. They also readied the few cannons they had left over from American Revolution. Then they lined the shores and waited for an attack. The British troops were shocked by the size of their army when they rowed close to shore during the night hours. The British started attacking with cannons. The townspeople took cover and waited until the firing stopped. Not one person was injured. Then they gathered all the cannon balls that were fired at them and used them in the cannons and fired back at the ship. The British fled the scene. A cannonball from the bombardment is lodged in the foundation of the Cannonball House, which now serves as the town’s maritime museum. 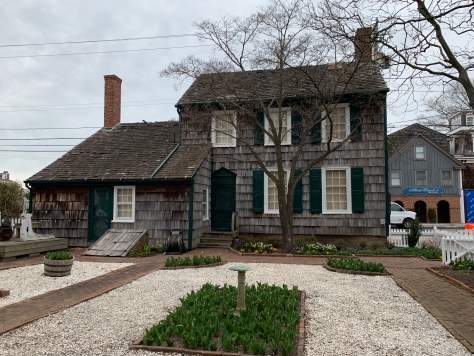 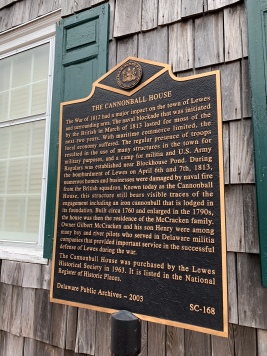 A Church of England congregation was established by 1681 and is still in operation today. We visited the first church in the first town in the first state, St. Peter’s Episcopal Church. Abby caught a special moment of Heather and I in the Church yard.

We parked on Main Street for free and were able to walk to the church and the cannonball house. We did some window shopping and popped into a fun toy store where Heather bought the girls a fun book and we discovered the game Exit, an escape room in a box. 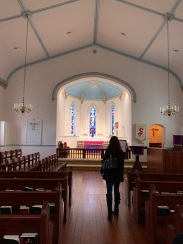 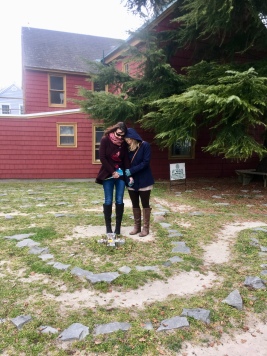 The capital of Delaware is in Dover. As one of the only state capitols built with bricks, this Georgian Revival structure was opened in 1933. It replaced the Old State House—a historic building constructed in 1791—and new wings were added in the late 1960s and the 1990s. It has a simple white tower instead of the typical dome.

They offer a nice free tour of their capitol building. We really loved that this capitol allowed us to sit in the representatives chairs. The history of Delaware’s state bird starts during the Revolutionary War, when a company of soldiers from Delaware, led by a Captain that carried a rooster for cockfighting. It was the offspring of a blue hen. The courageous group began winning battles and became known as the Son’s of the Blue Hen.

Our guide pointed out a portrait of a man on a horse and asked us if we knew who it was. We did not. We should have though. He played a very important role in the founding of our country. His name is Caesar Rodney, one of the signers of the declaration of independence. There is a great back story to his legacy. Rodney represented Delaware in the Continental Congress along with Thomas McKean and George Read from 1774 through 1776. Rodney was in Dover tending to Loyalist activity in Sussex County when he received word from Thomas McKean that he and Read were deadlocked on the vote for independence. To break the deadlock, Rodney rode 70 miles through a thunderstorm on the night of July 1, 1776, arriving in Philadelphia on July 2, just in time to cast his vote. He voted with McKean and thereby allowed Delaware to join eleven other states in voting in favor of the resolution of independence. The wording of the Declaration of Independence was approved two days later; Rodney couldn’t signed it until August 2, so he is not portrayed in the painting from the signing day. To make the 70 mile non-stop ride even more impressive- he did it while suffering from a fever, asthma and skin cancer. He knew how important his vote was and sacrifice everything for to cast it. 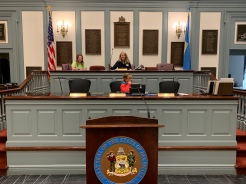 We stopped by the John Bell House where we started our free tour of The Dover Green which ended at the Old state House, where another tour guide took over. The Green is part of the First State national Historical Park, run by the NPS, First State Heritage Park and the Delaware Division of Historical & Central Affairs. On the tour, we visited the Golden Fleece Tavern where Delaware ratified the constitution and became the first state! Did you know that the most important meetings used to happen in taverns?

In the portrait of a general you see the special United States Army officer rank insignia, designated by the 5 stars on his collar. This special insignia was authorized by Congress for ten general officers who were promoted to the highest ranks in the United States Army: general of the army, designed as a “five-star” rank. Only one insignia out ranks the five star and that is the six star: general of the armies, which was created for George Washington. He is to remain the highest ranking officer. 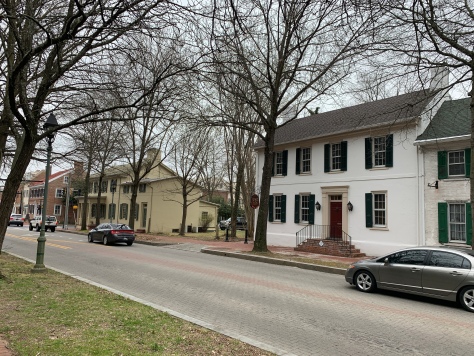 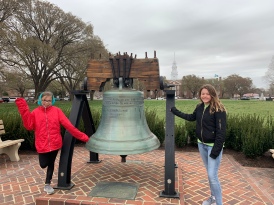 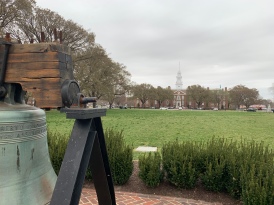 Heather took off one day to take us to a beautiful state park. William Penn made this one of the first pubic lands before we were the USA. The Seaside Nature center has horseshoe crabs, stingrays and a display of the ecosystem of the area. They have a bike barn out front where we could check out bikes and helmets for 2 hours and ride around the park. It’s run by donations only. We rode out to the beach and watched a wind surfer with the lighthouse in the backdrop. Then we rode out to the old WW II bunker and visited several of the observation towers. We also rode up to Herring Point, which is a very popular surfing location. You can drive to all these locations but we enjoyed riding bikes. 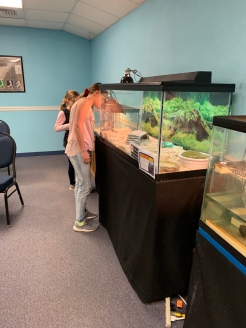 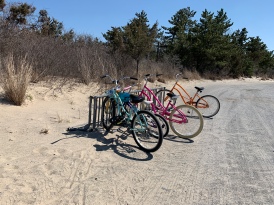 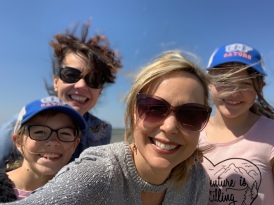 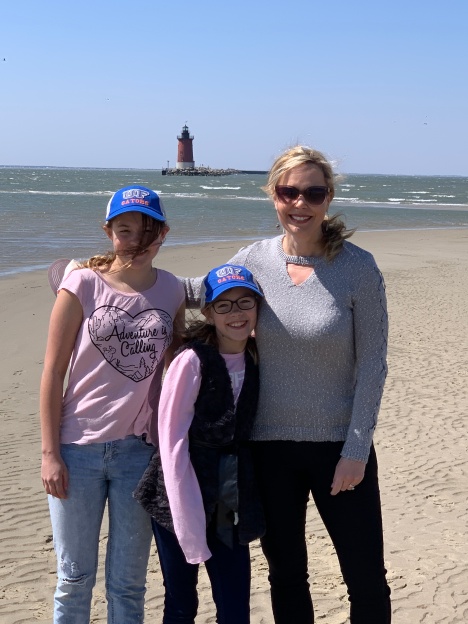 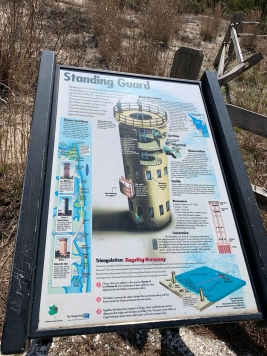 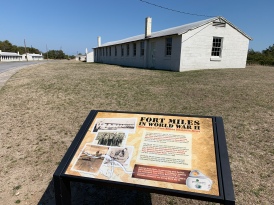 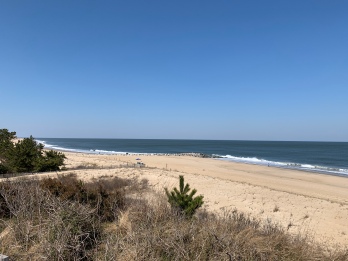 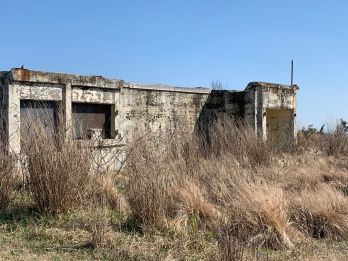 We had fun this week, exploring, playing games, doing school work, cooking dinners in a real kitchen and just hanging out in a house. Chris flew out of Salisbury Airport for business the 2nd-5th.