When you think of Kentucky, what comes to mind? Horses, bluegrass, Bourbon and Kentucky Fried Chicken, right? Well we experienced it all except the Bourbon.

Saturday, on the way to Frankfort from Indianapolis, we stopped at The Ark Encounter. It’s 2.5 hours away from Knightstown, IN). The Ark Encounter is located in Williamstown, KY. Even though it is only an hour away from our new campground in Frankfort, we wanted to stop on the way because Chris is going out of town and wouldn’t have a chance to go up there during the week. Since we were in the RV, we parked in the RV parking lot and a man on a golf cart met us by the door to take us to the entrance. Such a nice feature we weren’t expecting. The Ark is not seen from the road or parking lot. You have to buy a ticket and they drive up a hill in a bus to see it. Then you can tour the 4 levels of the Ark, the grounds and along with the zoo.

The inside has 4 levels. It took us all day to explore the entire thing. It was incredible. It’s hard to explain how big the ark was and how ‘real’ it all felt.

Sunday- we took Chris to the airport at 6:30am. We did our school work today so we could go back up the the Ark on Monday when it wasn’t as busy.

Monday the girls and I went back to explore the zoo and ride a camel. The camel rides were only open 11-6pm, so they were closed when we were done on Saturday. It costs $20pp. It’s just a slow ride around a loop two or three times but it was an experience.

We picked up Chris from the airport Thursday night at 7:30pm. Chris took off on Friday so we could spend the day in Louville. But first we stopped by the capitol to take a quick tour. They are only open M-F 8-4:30pm. It was only 15 minutes away from our campground.

On today’s itinerary we have the capitol building, Churchill downs, the Louville slugger museum and explore a ropes and zipline course in a cavern. 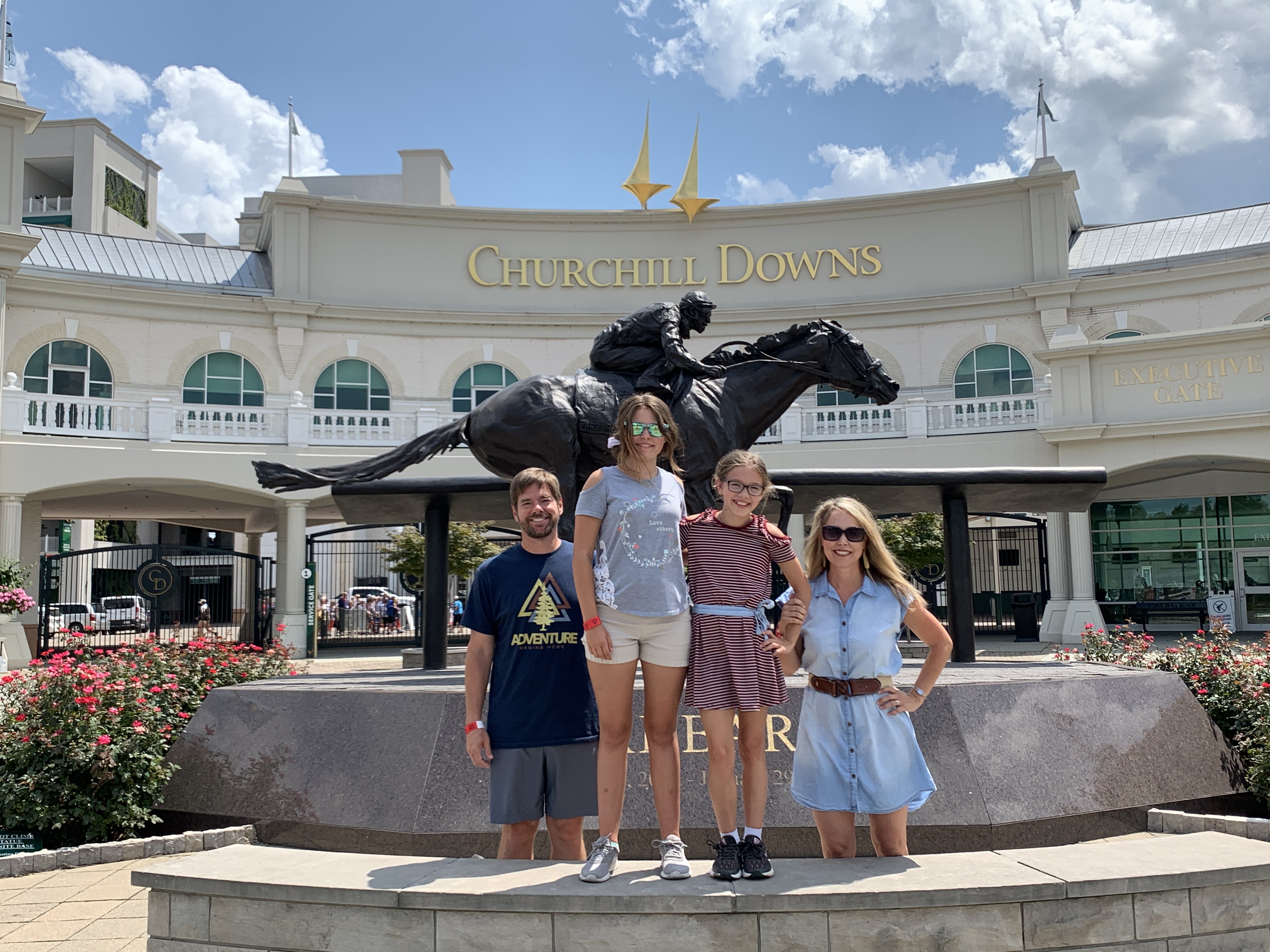 We left the capitol at 9:30am and arrived in Lousiville at 10:30am. We started our Louisville tour at Churchhill Downs to learn about the history of the Kentucky Derby and see where the famous horse race takes place. They are open M-S 8-5 and the walking tour cost $15A/$8C. We spent 11-2:30pm here which was a perfect amount of time. That included our tour, a film, lunch in the little cafe and walking around the museum.

The World’s most Legendary Racetrack. Also known as the home of the Kentucky Derby and the Kentucky Oaks and thoroughbred horses racing in Spring, September, and the Fall, since 1875. The racetrack occupies 147 acres, featuring a one-mile dirt, oval racetrack and a seven furlong turf race course. The backside barns located behind the racetrack house more than 5,000 horses each year. In addition, Churchill Downs Racetrack has hosted the Breeders’ Cup World Championship eight times.

When we walked into the museum and were about to walk up and get our tickets for the day, I noticed my good friend Michelle Puccio’s beautiful face on the main collage in the lobby. I texted her immediately and she didn’t even know about it!! She had been her for the Derby this year. Isn’t she beautiful?

The girls had fun playing a racing interactive video game (Mackenzie win every time!). We tried on Jockey gear and Mackenzie decided she’ll probably end up Jockey size when it’s all said and done. If the astronaut thing doesn’t work out, that is her back up plan.

The outside tour was about an hour long and included the stands, the finish line and the paddock.

Next up,  the Louisville Slugger museum and factory. We arrived at 3:00pm because it is only 15 minutes away from Churchill downs.

Louisville slugger has made 1.8 million bats in 134 years!

The factory tour costs $16/A, $9/C and is 30 minutes long. We were able to go through the actual factory and received a mini bat at the end. It’s a great tour, I highly recommend. They cover the history, the engineering, and the baseball passion.

While we waited for our tour time, we explored the museum. We sat in on a little production and lesson on bat making during the war. There is a batting cage and room where they have crafts for young kids. The girls were able to color rejected mini bats. In the museum they have wax figures to take selfies with and a fun photo op. We spent 2.5 hours here and thought that was plenty.

We bought tickets for Mega Adventure, the world’s only fully underground zip line and ropes course. The Mega Cavern is a former limestone mine in Louisville, Kentucky. The cave stretches under parts of the Watterson Expressway and the Louisville Zoo. Due to its support structures, it is classified as a building and is the largest building in Kentucky. It was $25pp and we had an hour in the course. We played in the arcade afterward.

Tuesday we schooled and then on Wednesday the girls and I headed to Lexington to visit the Kentucky Horse Park. We took the the horse drawn trolley tour at 10am and then we did a Horseback riding adventure at 4pm.

The Kentucky Castle is in Versailles, KY, near Lexington. It was a castle built by The Martin Family, in 1969- in 1975, they divorced and left it unfinished. It was sold finally in 2004 and turned into a Hotel.

On the way home from picking up Chris from the airport on Thursday night we stopped for dinner at KFC and a gator chomp in front of the University of Kentucky stadium. The girls have actually never eaten at a KFC so this was a perfect time to introduce them. They loved it! There is a really interesting story behind the Colonel Sanders. Mike Rowe has the best podcast about it on his “The way I heard it” show.

Mackenzie saw a fun science experiment in her book she wanted to try so we made a crystal farm this week.

I wanted to see several other things in Kentucky but didn’t have time.

Hodgerville- Birthplace of Abe- on the way to Mammoth