I had this destination on the list of day trips to take from St. Augustine but when that 10 day stay was cut short to 5 days- Daytona was cut from the itinerary.

I’m happy to report it made it back on the itinerary by default. If you read my earlier post we are suppose to be in Orlando right now but not one RV park is open because of the hurricane. The closest place was Daytona Beach. We had to be close to Orlando because Chris had a flight out on Friday from there. This will be our first time on the road without him.

I am honestly super excited about staying in Daytona Beach and getting to drive my Jeep out there.

My excited was halted driving down here because of what I saw from the highest. It was surreal. We saw caravans of army trucks, gas trucks and power company trucks. The caravans would be 10-20 trucks long. Some of the power company trucks were from Kentucky and Connecticut. All the billboards on 95 were shredded to pieces from IRMA’s winds. Trees were fallen. The RV park we found that had power and had cleaned up most of the debris but the poor lime tree at the front of our spot was broken in half and all the limes were touching the ground. Irma didn’t discrimate- she took down the large and small trees. After being frustrated with spending hours looking for an open RV park and then seeing all of this, my priorities were put in check. On our way to the beach the next day we saw many more signs and trees blown down. There was a lot of debris in the ocean as well. During our stay here, we had many flooding reports in the area. Everyday I had to check which streets and neighborhoods were effected before we headed out. When we drive through Jacksonville, we could see the St. John’s river had crested into the city and was continuing to do so.

One of the days we were stopped at a traffic light waiting on a train. The lady next to us had her windows down as well so we started chatting with her.

I am meant for traveling the country and learning all about the local areas because I love people and listening to whatever information they will give me. I have always been curious and loved education, hence getting my Masters and then teaching high school. I have never chosen a job because of the amount of money I can make but because of what I can learn and what kind of impact I can make. I am now teaching my own children and making zero dollars but this experience is priceless!! Anyway, back to my chat with the local women, in her car, at the stop light. We learned a lot about the Daytona area and her experience with Hurricane IRMA. She told us she was on Day 5 of no power which meant no shower so she was bringing her kids to the beach to play and shower off in the public facilities. It was 95 degrees today so as you can imagine the Florida heat was unbearable. The beach provides wind off the shore which can be a respite from the still air inland. Everyday she would drive her kids around in the car; schools were still closed.  She explained to us how she prepped for the hurricane by cooking all the meat ahead of time and prepared meals in ziplock bags and stored them in the freezer. Today the freezer was cooling off and things were not frozen any longer so they were going to have a feast tonight. Her children were learning first hand how to survive before modern conveniences of Refrigerators, ovens, air conditioners and technology (the cell towers were down for days as well). The girls hung on every word the woman said. The train took 20 minutes. It was very impactful. 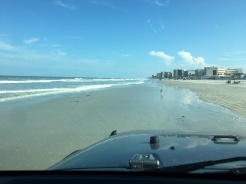 Photo shoot with “Rogue One” 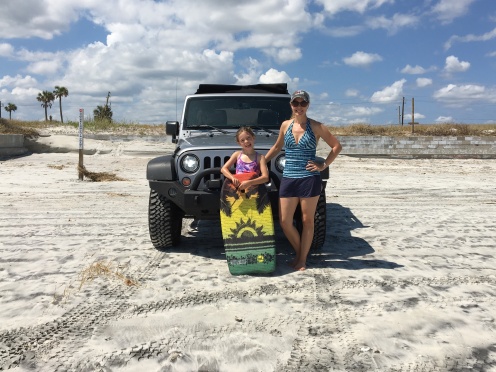 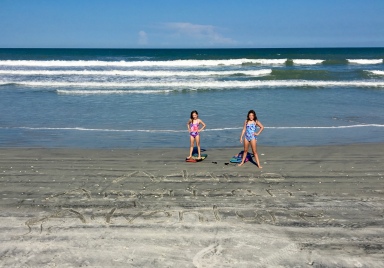 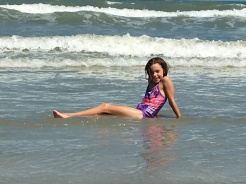 Being able to hang out in shade by the Jeep

Here is a snap shot of our two days boogy boarding and driving on the beach. Both days it was forecasted to rain so I didn’t take the doors and windows off.  The wind was strong and the rip current was rough because of all the turmoil in the Atlantic ocean. The second day we parked near the park jetties and watched and talked to the fishermen. The girls learned so much about fishing to feed a family. They taught them how to catch and filet fish. Before we walked out to the jetties the girls had gotten out of the water because big fish were nipping at them and hitting their legs when the waves crashed. When were were up on top of the jetties we could see the schools of fish. These fishermen were reeling in one after another; Jack, Brine, Grouper and Trout. This is what road schooling is all about.

The tide was coming in and the winds and waves were so high and strong that we were getting splashed. When the waves were crashing over the deck and we were having to hold on to the rail we decided it was time to walk back to the beach. We also needed to check on the Jeep because the tide was coming in and I had seen the lifeguard truck pacing the beach. I had to hold onto Mackenzie as we slowly walked back down the platform as waves were striking us from the side. That last picture you can see the beginning of the waves raising and the winds blowing Mackenzie’s hair. After that I put my camera away. We made it safely back to shore and the Jeep was not in the high tide waters yet but it was time to go. 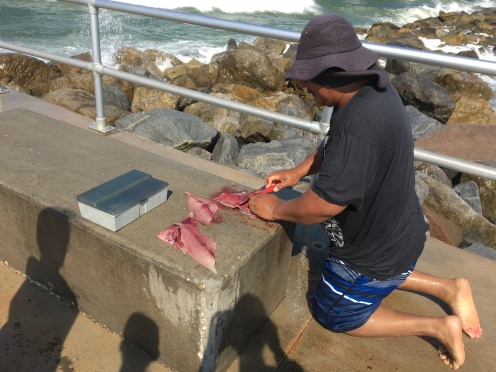 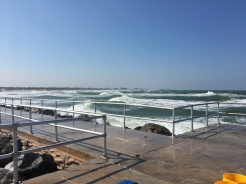 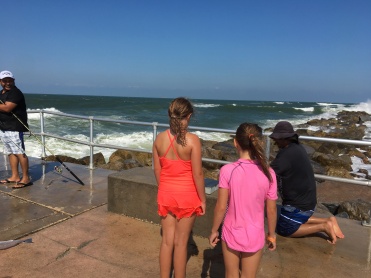 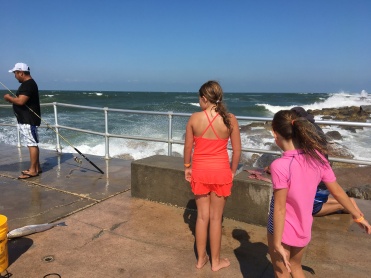 On the way home we ate at Riptides seafood grill on A1A (beach front avenue). We have driven on A1A since Jacksonville, and every time we do, we play ICE ICE BABY. The plan was to drive down A1A to Key West but the Keys are still closed. They are only allowing people with businesses or proof of residency through deputy guarded blockades. Most of the buildings along A1A still had plywood boards on their windows. Some had spray painted OPEN on them after they restored power inviting guests in for a cold one.

My Jeep was made to drive on the beach, as you can tell she’s like one of my children… I took just as many pictures of her as the children:) One of the places we parked was the south turn of the Daytona 500. 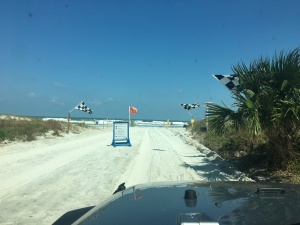 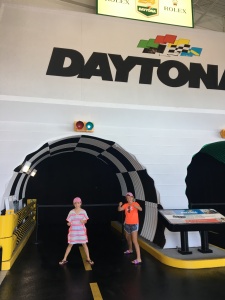 One thought on “Daytona Beach, FL”