We arrived to Crater Lake RV Park on Saturday, March 31st. As soon as we drove up, we all agreed it looked just like northern Georgia!

Saturday after settling in we hiked along the Rogue River right behind our site. We quickly learned that we had ZERO cell service so we adjusted our plans for the week. We decided we’d stay the weekend and then move Monday after Chris finished work. We found an RV Park in Eugene, OR. It’s a nice park with very friendly people, we would have like to stay if we could. There are so many waterfalls and things to do near this RV park but we didn’t have time since we had to move.

Here’s the cell service map for both our providers. See the blue dot in the white area indicating Zero service? 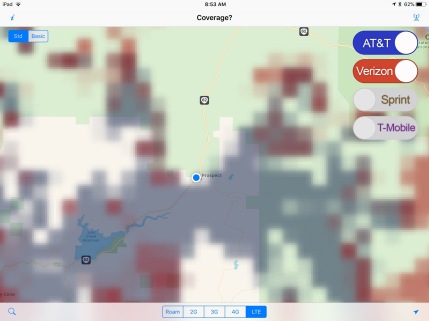 The next day we woke to find that the Easter Bunny had found us in our new home and location.  We celebrated Easter by spending the day at Crater Lake National Park. 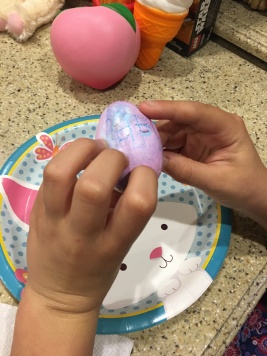 It was chilly so we bundled up and headed to Crater Lake. I did not do any research for this park so I was surprised to see all the snow. We had not planned to ‘play’ in the snow so we did not have our water proof pants and boots on.

First, we checked into the Visitors Center to show our annual pass and pick up the Junior Ranger books for the girls before heading up to see THE lake. While waiting for the girls to pick out their keychain and magnet souvenir,  I started reading the park paper and learned that there was going to be a ranger led snow shoeing hike at 1:00pm… WHAT? We’ve never done that before- we were excited. I asked the ranger at the desk where we meet for this and she said that it was filled, apparently those that planned ahead called and signed up ahead of time. It was Easter Sunday, I was surprised by how many people were in the park. Well I walked away with a sad face. I saw another ranger walking around the VC and asked him if we could get snow shoes and go on our own hike. He said we could rent them for $16 each and head out on our own. My sigh must have sounded really pathetic because next thing I know he is fitting us in on the sign up sheet for the FREE ranger led walk. We are in!

Luckily, we had packed our lunch so we quickly ate lunch in the car and met the group at the top to start our hike. Right before getting our snow shoes on, we captured a few quick  shots of the lake because it looked like a storm was rolling in.

It was so cool walking through the forest with 8 feet of snow beneath us. 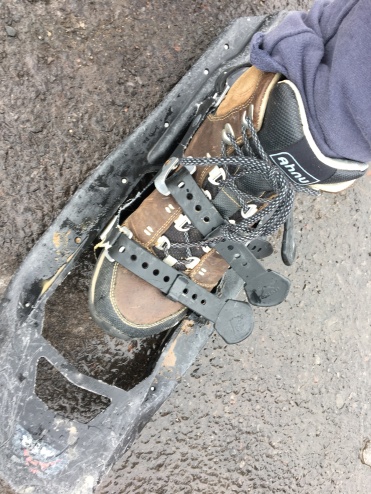 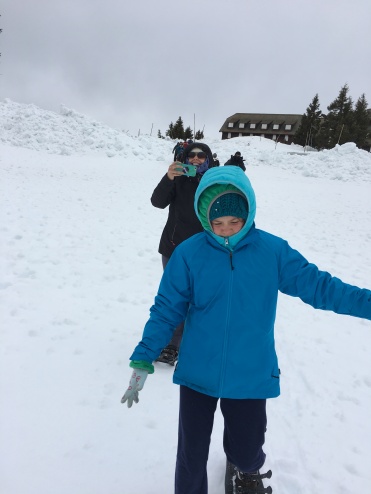 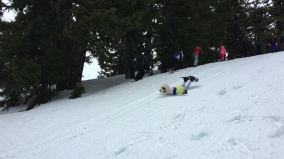 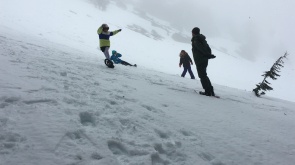 The Ranger was so informative. We hiked for 2 1/2 hours, stopping along the way to learn about the plants, animals and history of Crater Lake National Park. The hike was taking us to a great lookout but when we got there it was completely covered in clouds the reduced our visibility to zero. But the snow shoeing hike was still totally worth it!

Crater Lake was formed from a collapsed volcano. The basin that eventually became Crater Lake formed when a 12,000-foot-tall volcano called Mount Mazama erupted and collapsed 7,700 years ago. The volcanic basin, called a caldera, eventually filled with water and became the lake that we know today.

It is is the deepest lake in American with a depth of 1,943 feet.  The body of water also ranks as the ninth deepest lake internationally. Because there are no inflowing streams (there are also no out flowing streams), the lake is fed solely by rain and snow. It is the cleanest and clearest large body of water in the world, according to the NPS. Sunlight is able to penetrate deep into the lake and this is what gives it the deep blue color.

The park is snow-covered from October through June or July. The annual snowfall is 44 feet- not inches people- feet!  Although it’s cold enough, the lake itself doesn’t completely freeze over. The last time the surface was completely frozen was in 1949.

Here’s what it looks like in the summer. This video is from the NPS.

In the summer, when the snow melts, you can take a ranger led boat ride out to Wizard island. Once on the water, you can drink straight from the lake.  Wizard island was formed as the lake was filling up with water after it’s collapse. This cinder cone was formed right after the collapsed  7,700 years ago.

This 28 second video by the NPS explains.

Since we didn’t get our family picture on the rim of the lake, we took one with a picture of it:)

I have always loved moss growing in the forests back east but out here in the Pacific Northwest I fell in love with lichen. Here is a picture of the lichen that grows on the trees here in Crater lake, just above the snow line. Lichens are not plants, they are a complex life form that is a symbiotic relationship between a fungus and an algae, they must both work together to exist. The dominant partner is the fungus. The ranger explained that the ‘algae brings the margaritas to the party while the fun-guy brings the fun!’ Mosses are non-flowering simple plants with roots, stem and leaves.

I loved the rain forests of this region because EVERYTHING is green! The ferns cover the dark ground, the lichen and moss cover brown bark or the trees and the evergreen needles and other tree leaves fill the sky with green. 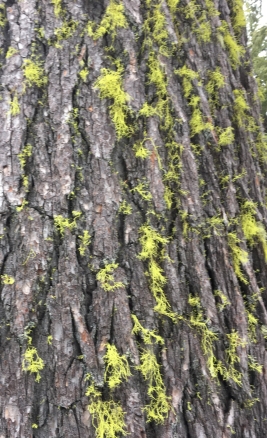 It continued to snow up at Crater Lake but when we got back to the RV it was warm. The forecast for the next day was suppose to be warm and sunny. Chris being the awesome husband that he is, suggested that the girls and I drive up to Crater Lake again to hang out and get the pictures of the Lake I wanted while he worked. Then he would drive the RV the next spot in Eugene by himself while we explored all day and met him there later in the Jeep.

We started by our RV spot at the Rogue Gorge Viewpoint. 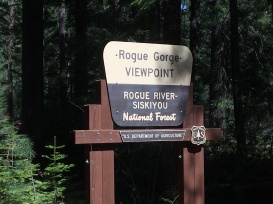 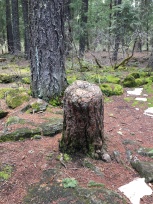 We saw a snow park place on the way so we stopped here as well. It turned out to be a snowmobiling park. Obviously it was Monday morning so there was no one there. The girls got their sleds out and had a little fun. Abby tried body sledding again but it didn’t work as well here.

Then we headed up to the mountain to see Crater Lake again on a beautiful day. The roads had a dusting of snow from the day before which I love because it looks so bright white. 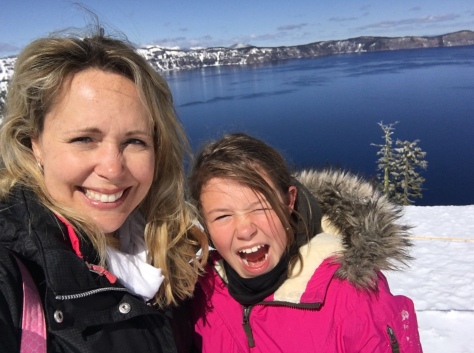 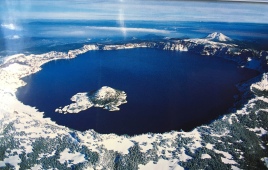 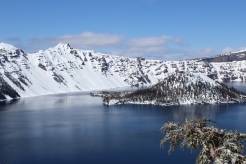 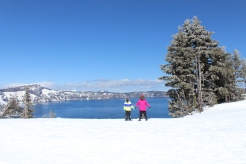 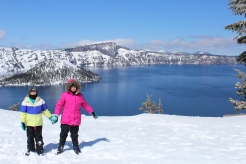 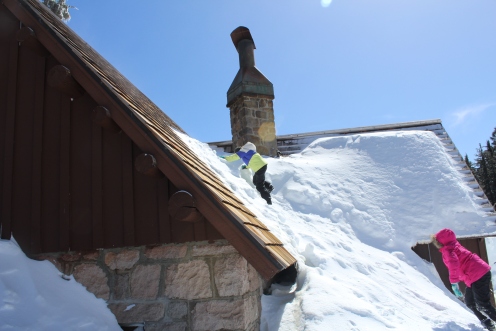 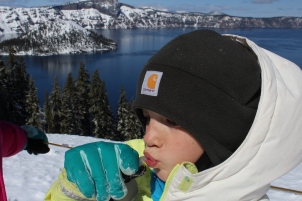 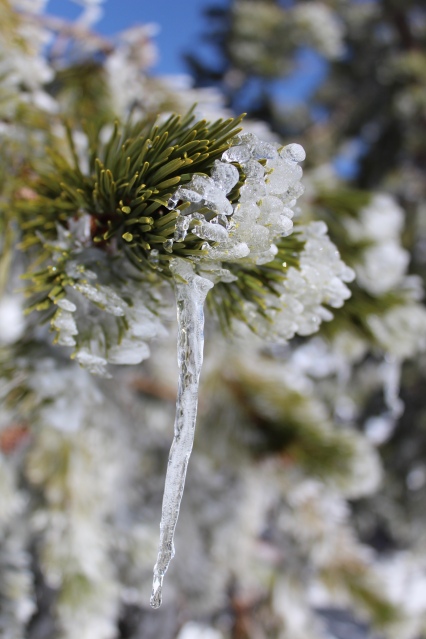 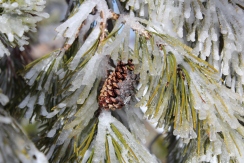 The girls just love sliding down roof tops! The last video was taking on that second CLEAR day we headed up. I had to take a comparison video to the one Chris took the first day.